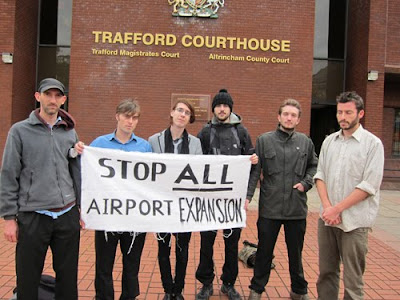 On 24th May 2010, the six created a human circle around a stationary plane using arm tube lock-ons in order to keep the plane grounded. The six are challenging the recent decision to expand the World Freight Terminal which will involve the demolition of historic homes on Hasty Lane.

Manchester airport faces continued scrutiny for wanting to increase airport capacity whilst aviation expansion continues to be incompatible with climate change targets across the UK [1]. Following the recent decision to stop expansion at Heathrow, Gatwick and Stansted airports, the aviation industry is likely to look to regional airports such as Manchester to increase profits. The environmental and social impact of Manchester airport will further be on the spotlight during the trial as all the local councillors around the airport had their unanimous objection to expansion overturned by the Manchester Council Planning Committee in November 2009 [2].
Penny Woodson from local campaign group Manchester Climate Action said, "Despite the threat of climate change, Manchester Airport wants to demolish local people's homes to expand flight numbers and increase emissions. The public are facing VAT rises this January yet the aviation industry pays no VAT at all. With all these injustices stacking up, direct action is necessary." [3]

Another group who simultaneously used tripods to blockade the World Freight Terminal preventing airfreighted goods from being taken in and out have been charged with obstruction of the highway. Those defendants have already pleaded not guilty and will stand trial on 6th December 2010.


Notes for the Editor:

[1] http://www.aef.org.uk/downloads//AW_Regional_Airports_Paper_Sept2009.pdf A Briefing Paper from AirportWatch 'The Expansion of Regional Airports Really a Good Thing?

[2] In September 2009, local Councillors on the Wythenshawe Area Committee vote unanimously to reject the Airport's plans to demolish homes on Hasty Lane to expand the World Freight Centre.
Posted by Robbie 2 comments:

SEMA made an official submission to the "Core Strategy Pre-Publication Partial Consultation". This is part of forming the Local Development Framework for the Greater Manchester region. This is the framework against which future planning decisions will be made, including airport expansion plans.

You can see the documents that are being consulted on here:
http://www.manchester.gov.uk/downloads/download/3983/core_strategy_pre-publication_partial_consultation

The 'Need for Land' documents exactly details exactly how Manchester Airport is proposing to expand. It's a long read but how individual projects such as expanding the Freight Centre over Hasty Lane are part of a much larger, long-term plan to increase capacity and flight numbers. More flights, more noise, more emissions.

SEMA's submission argues that since the future of national aviation policy is unclear, including the High Court ruling that the 2003 Air Transport White Paper is not compatible with the 2008 Climate Act, it would be unwise for the Council to support expansion plans at this time. It also details arguments about the effects of the airport on jobs and the economy in the North West region.