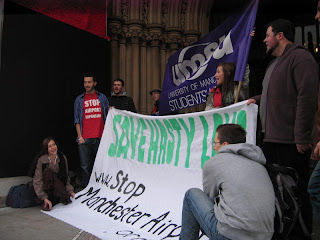 Manchester City Council Planning Committee has approved plans by Manchester Airport to demolish a row of houses to to build a new air freight terminal.

The nine committee members voted 5:4 in favour of the plans – with the Labour majority voting in favour and the Lib Dem minority voting against.

Campaigners from the Stop Expansion at Manchester Aiport group were inside and outside the meeting to show their support for the residents.

After the decision was made, the residents and campaigners agreed that this was not the end of the fight, and that they would investigate ways to appeal the decision.

There will be public meeting this coming Thursday 26th October to discuss ways of opposing the Airport's expansion plans. All members of the public are invited to attend.

and Save Hasty Lane – Public Meeting

Posted by Robbie No comments:

Manchester Airports Group (MAG) have been the first applicant to be rejected from the popular 10:10 campaign, which asks people, business and government to commit to cutting their carbon emissions by 10% by the end of 2010.

Although Manchester Airport is committed to becoming 'carbon neutral' by 2015, this does not include the emissions from the aircraft that land and take off from its premisies. With this in mind, their otherwise laudable efforts of installing energy efficient lightbulbs, motion sensors and biomass burners can be seen as greenwash deception – an attempt to fool the public that the airport is green, when it is actually far from it.

MAG wants to pass the buck, saying that the responsibility for aircraft emissions lies with the airlines. But with a business plan which aims to more than double passenger numbers to 50 million per year by 2030, it's obvious to everyone else, including 10:10, that the airport is also responsible for emissions by encouraging and facilitating more and more flights.

It is MAG that competes for airlines to use its four airports (Manchester, Nottingham East Midlands, Humberside and Bournemouth). And it is MAG which runs advertising campaigns across Manchester encouraging people to use their airport as much as possible.

So Manchester Airport is passing the buck onto the airlines. So who will take responsibility for the hot potato of carbon reductions? It seems that the aviation lobby is also keen to defer responsbility.

Flying Matters's chairman Brian Wilson blundered into the debate saying that the 10:10 decision was “the eco equivalent of political correctness gone mad,” and that, “if the 10:10 campaign were serious about making a difference it wouldn’t matter where the emission cuts came from, so long as they were made.”

Clearly issues of climate justice are not prominent in the minds of th aviation lobby. By Flying Matters' logic the aviation industry can carry on polluting as much as it likes so long as someone else - somewhere else, make the carbon cuts so that they don't have to.

Let's take a look at what aviation expansion would mean for the rest of UK economy. In July 2009, the government's Committee on Climate Change reported that if we are to allow airport expansion to go ahead as planned, then the rest of the UK economy will have to decarbonise by 90% rather than 80% to meet the 2050 targets of the Climate Bill.

So everything else that we all use regularly, from electricity for lighting to fuel to heat our homes – everything else will have to make more carbon cuts to accommodate the aviation industry's insatiable appetite for growth. This would push up the cost of these changes, thus penalising essential services to accommodate the luxuries of binge flying, and exacerbating issues of fuel poverty.

Since MAG, won't face up to its responsiblities, and neither will the Manchester Council, then it's time we brought these carbon contradicitions to the table, by placing a cap and then annual emission reduction targets on all the airport operations, including the flights. 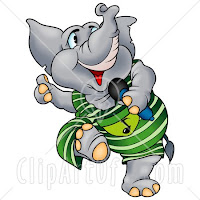 With plans for a third runway a Heathrow looking less and less likely, the battle against airport expansion will need to be taken to regional airports around the country.

Manchester Airport already emits twice the amount of carbon emissions as Uganda and has plans to more than double passenger numbers to 50 million per year by 2030. It is owned by the councils of Greater Manchester but its true emissions of are consistently overlooked and ignored by local authorities in climate change action plans.

It is in effect - our local elephant in the room.

Come along to hear what's already happenening to reign in airport expansion both nationally, regionally and in Manchester.

http://www.stopmanchesterairport.org.uk
Posted by Robbie No comments:

Call out for Support:

Save Hasty Lane and show your opposition to Manchester Airport's plans

The plan to double air freight capacity at the expense of the historic and important ecological site at Hasty Lane was unanimously rejected due to economic and environmental concerns.

Air freight has halved in two years, and has suffered a constant decline in the last 15 months as the recession shows no sign of recovery in aviation.

Cllr Eakins and Peter Johnson, tenant of one of the threatened homes, made representations to the committee outlining their objections on environmental and economic concerns. The committee then unanimously rejected the plans citing these concerns.

The minutes from the meeting should be available on the Council's website here at some point in the future.

Cllr Eakins said: “As air freight has halved in the last two years, it makes no economic sense to double the capacity when the Airport will never get to use it! Two beautiful family homes and an ecological paradise at the edge of the Airport would be bulldozed if this had gone ahead, and I'm delighted the Wythenshawe Area Committee have seen sense and rejected it.”

The plans will now go to the main Manchester Planning committee which will have the final say on Thursday 19th November.

Posted by Robbie No comments: