Pigs can fly, hundreds of them 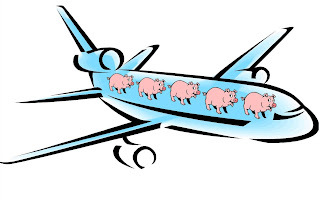 Back in November 2010, British Prime Minister David Cameron, and Business Secretary Vince Cable, led the biggest UK trade delegation to China in 200 years. The government aimed to double UK trade with China over five years, and to narrow the gaping trade gap. This is indeed important for the UK economy, struggling to compete with China’s high value, hi-tech products. In 2009, the disparity between the value of goods the UK exports to China and the value of its imports was £19 billion.

Specific major trade deals negotiated by Cameron and Cable included a £1.9 billion contract for Rolls-Royce to supply jet engines to China Eastern Airlines, and a £45 million deal to export British breeding boars. JSR Genetics, an international pig genetics company, based in Driffield, East Yorkshire, was one of the companies to benefit from the trade deal. On 5th April 2011, JSR Genetics announced that over 800 breeding pigs, sent on a chartered Boeing 747 flight from Manchester, had landed in Guangzhou. The pigs were just three breeds - JSR Genepackers, GGP Gilts and JSR Geneconverter GGP Boars. JSR Genetics is part of JSR Farms, based in South Yorkshire. One of the photos scrolling on the website is of a plane being either loaded or unloaded with pallets.

Flying livestock around is environmentally disastrous, adding to the greenhouse gas emissions from passenger flights. But it is understandable that air is the usual mode for long distance transportation of livestock. A sea journey would take about a month. So herds of pigs are loaded onto jumbo jets. A flight from Winnipeg to Chengdu, in Chiana’s Sichuan province in July 2012, carried 850breeding pigs. The flight delivered a ‘nucleus herd’ for the buyers, Giastar, which is aiming to have 5 million pigs in production. And even higher numbers of pigs are loaded onto jumbo jet flights to Russia. AirBridge Cargo flew 1,150 ‘Large White’ pigs from Winnipeg to Moscow in March 2010, and crammed 1,275 breeding pigs onto a Boeing 747 flight from Montreal to Vladivostock in 2011.

Planes loaded with herds of livestock are just one, particularly carbon intensive, segment of lengthy food supply chains criss-crossing the globe, with multiple transportation legs between production, processing and consumption. But, even if within the industrialised, globalised food system, there is an alternative. Breeders can send small vials of semen, germplasm or embryos instead, by air. In the US, USDA is advocating this as a replacement for air freight of livestock.

By July 2012, 3,000 breeding pigs had been flown from the UK to China in the space of a year. Once the herds in China are established UK farmers will send bottles of semen to keep production going, but still plan to send a new batch of sows every two years. Apparently up to 900 pigs are packed onto jumbo jets. They get lie-down beds and water all the way. It sounds better than humans flying economy class. All the pigs arrived safely. That is good to hear. Corporate Watch reported that JSR Farms were prosecuted for falsifying information claiming that live export pigs were properly rested on an overland journey from Wiltshire to Hamburg. The pigs had been denied the mandatory 24 hour resting period.

China is massively increasing pork production, in industrial feedlots. By 2010 China produced 50 million tonnes of pork, half of the world total, from a herd of 660 million. Almost all the pork was consumed domestically. But the country’s self sufficiency in pork is superficial. Animal feed imports must be considered. In addition to flying in Boeing 747s full of breeding stock, China’s domestic pig production boom depends on imported animal feed, largely soybeans from the US and Brazil. Imports to China accounted for over half of the global soy market in 2009, and 2010.